Cal Grinding, Inc. dba Cal Valves, 1401 North 26th Street, Escanaba, MI 49829
INTRODUCTION Since the 1980's, engine remanufacturers have known of the significant cost savings that can be achieved by reaming the valve guides and installing remanufactured engine valves that are sized slightly larger (typically 0.008 in. O.D.) than new engine valves. By standardizing the intake and exhaust valve O.D.'s to the same oversized diameter, both heads of a typical V8 engine can be reamed in approximately 2 minutes.

The majority of the engine remanufacturing industry agrees that benefits are to be had from wet reaming, but little information exists showing, systematically, the specific benefits of using coolant to aid in valve guide reaming. To achieve highly accurate and consistent diameters with a reamer, one must consider process variables that can influence the overall quality of the reamed engine valve guide. Variables such as reamer material or design, valve guide material, temperature at the reamed surface, drill speed, operator movement, etc. must be addressed.

The following study seeks to show that by controlling these variables to the best extent possible, the reaming process can easily produce highly accurate, and consistently sized guides. To this end, 486 engine valve guides were reamed under three different conditions. A group of valve guides were reamed with coolant continuously delivered to the reamer, (WR). The second group of valve guides was reamed with a reamer that was dipped into coolant prior to performing the reaming function, (SWR). The final group of guides was reamed completely dry, (DR).
MATERIALS AND METHODS Engine cylinder heads with integral cast iron guides manufactured for Ford Motor Company (302 cu. in. V8) and General Motors Corporation (350 cu. in. V8 and 4.3 L V6) were the subjects within this study. The CalValves R-3516 (11/32" + 0.008" oversized) valve guide reamer performed the cutting operation which left the engine valve guides oversized from original equipment specifications. An Ingersol Rand heavy-duty drill (Model 7811, rated at 2750 free RPM at 90 psi air) was used to rotate the reamer during the cutting operation. The seat cone utilized was from the K-Line Boring Bushing Kit (K-Line part number KL8550) and the conjoining boring bushing was a Cal Valves coolant through bushing (Cal Valves part number CBD (0.2270 in or 6 mm)). 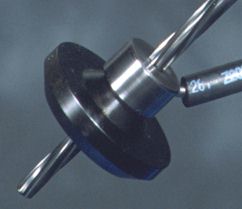 The reamer setup involves sliding the boring bushing over the reamer, chucking the reamer up to the drill, and sliding the appropriate seat cone over the boring bushing. This operation was the same for all reaming processes, WR, SWR, DR. For WR, the boring bushing was then connected to a coolant feed pump. For the reaming operation, each cylinder head was positioned in a reaming station with the combustion face facing upward. For WR and DR, the pilot end of the reamer was placed into the engine valve guide to an approximate depth of 1" and the seat cone was pressed firmly against the valve seat. For SWR, the reamer was submerged in the coolant as to fully coat the cutting edges of the reamer just prior to placement in the valve guide.

The drill was then activated and the reamer was smoothly pushed down the guide with little pressure. (It should be noted that for the case of WR, coolant would begin to flow as the drill was activated and flow would discontinue only after the drill trigger was released.) Once the cutting edge had completely passed through the engine valve guide, the reamer was withdrawn from the guide.

With the reaming process complete, the valve guide inside diameter (ID) was measured with a Sunnen P-310 Valve Guide Gauge. The ID was measured in three places as to achieve an indication of the internal macroscopic geometry of the valve guide. Measurements were taken and recorded from each end (rocker and combustion face sides) and in the middle of the reamed valve guide. 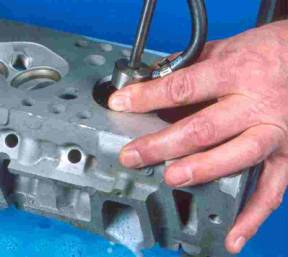 The results show that wet reaming yields more predictable and consistent results while dry reaming gives the greatest variation of results. The data was further processed using the Mann-Whitney U-test to determine if differences in any combination of the three distributions were statistically significant. All combinations showed the distributions to be statistically significantly different.


CONCLUSION Since each of the three groups were reamed under the same conditions, using the same equipment, with the only difference being the amount of coolant used, the results statistically support the conclusion that wet reaming has a positive influence on valve guide finished characteristics by allowing guides to be reamed repeatedly to a consistent diameter.
ACKNOWLEDGMENTS Cal Grinding, Inc. thanks Gopher Motors for providing the test specimens for this study.
FOR MORE INFORMATION Contact:
Cal Grinding, Inc.
1401 North 26th Street
Escanaba, MI 49829-2500
P: 906-786-8749
F: 906-786-1398
E: Sales@CalValves.com